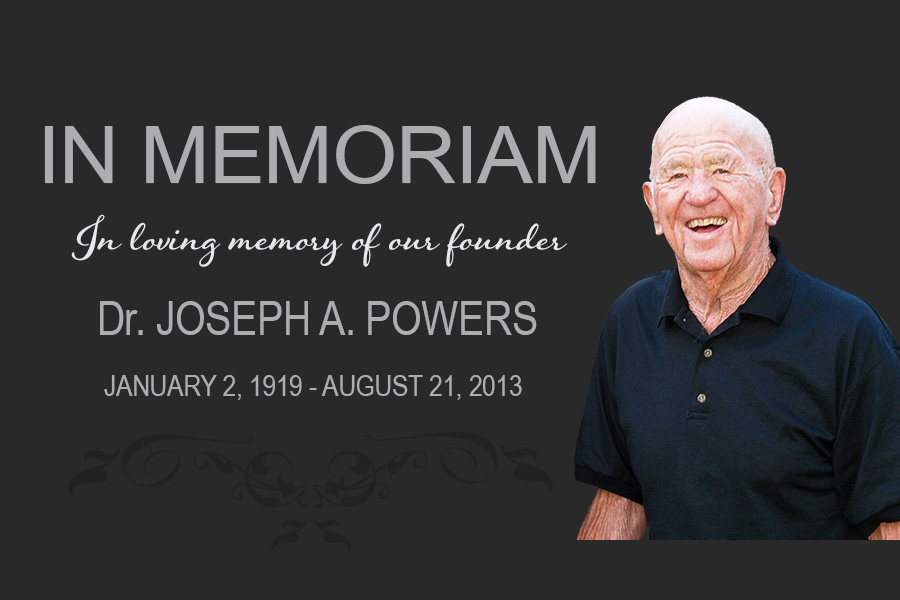 Joseph Albert Powers, M.D., 94, of Rancho Cucamonga, CA, died in his home surrounded by his loving family on Saturday, August 31, 2013. Dr. Powers was born in 1919 in Philadelphia, Pennsylvania to Irish immigrants James and Sarah Julie Powers and was the eighth of nine brothers and sisters. His mother died when he was six, and his sixteen-year-old sister Marion mothered him as he was growing up, and he helped her with the grocery shopping and cooking.

Growing up in Philadelphia, he worked many different jobs, including being a shoe shine boy, a cutter at a children’s clothing factory, working the soda fountain and making deliveries at Tabby’s Drugstore, and working at the local hardware store. He also worked as a golf caddy, where he developed his lifelong love of golf.

He was the only one in his family who was able to put himself through college. He attended two chiropractic schools, one in Philadelphia and the other in Chicago, Illinois, where he received his doctorate degree in chiropractic medicine. He then went on to study pre med at Loyola University in Chicago. It was during this time that he met the love of his life, Geraldine (Jerri). Upon completing his studies at Loyola, he joined the United States Navy and was sent to the U.S. Naval Hospital in San Diego, California. He and Jerri were married in San Diego on March 2, 1945. At the end of WWII, they moved back to Chicago, where he attended medical school at Loyola University and received his doctorate degree in medicine in 1949. He attended his internship at Loretto Hospital in Chicago and his residency at Hines Veterans Hospital in Maywood. He then attended three years of residency in general surgery, followed by 2 additional years of training in thoracic surgery. During these years, his first two sons were born, Scott Joseph and Gregory Joseph. He then took a position as a general surgeon at Norton Air Force Base in San Bernardino, where he performed many interesting surgical procedures and also taught surgical residents. During this time, his third son, Thomas Joseph, was born. Falling in love with the mountains and oceans, they decided to make Rancho Cucamonga their home. His fourth son, Michael Joseph was born shortly thereafter.

Dr. Powers was board certified in general surgery and practiced thoracic surgery at several hospitals throughout the Inland Empire, including San Antonio Hospital, Pomona Valley Medical Center, and Doctor’s Hospital Montclair. He was the first surgeon to use a laser at San Antonio Hospital. He was a member of the American Medical Association and the California Medical Association. He was also the Vice President of the Ontario Chamber of Commerce, Chair of the Red Cross, and Medical Director of the Hypnotic Society, and he volunteered his medical services with the Flying Samaritans and Catholic charities. Dr. Powers practiced medicine for 36 years from 1957 until he retired from medicine in 1993. He was devoted to and loved his patients, who loved him in return. His office door was always open, and he never refused treatment to any patient.

One of his favorite hobbies was playing golf, and he could often be found playing at the practice hole at Red Hill Country Club (RHCC) or taking a nap in his golf cart. He was very proud of making a “Hole-in-One” at the fourth hole! In 2012, he was honored as being the oldest and second longest member of RHCC, and he enjoyed his lunches there, where he favored the clam chowder and shrimp cocktail. For many years he brought so much joy to his grandchildren and hundreds of other children playing Santa Claus at RHCC’s annual Christmas parties.

Dr. Powers was a devoted and loving husband, father, grandfather, and uncle. He enjoyed spending time with his family on the water at Lake Havasu and Lake Powell, snow skiing at Mammoth Mountain, and vacationing in Hawaii. He always taught his children to love God, believe in themselves, and show love and compassion to others. He was known for his wonderful sense of humor and clever Irish wit, as well as his generosity and love of family. He found joy in teaching his children and grandchildren inspirational poems and proverbs, such as “Upon the sands of hesitation…,” “Good, better, best…,” and “A new dawn, a new day…” Dr. Powers loved life and he loved people. He also loved music and sang “The Goodnight Song” every night to his children, who have carried on this tradition to theirs. He is greatly missed and will be forever in our hearts.

A funeral Mass will be held at 9:00 am on Friday, September 6, 2013 at St. Peter and St. Paul Catholic Church in Alta Loma, California with Reverend Cyriacus Ogu officiating, and the Rite of Committal will be held at 10:30 am at Bellevue Memorial Park.

In lieu of flowers, the family requests that donations be made in memory of Joseph A. Powers, M.D. with either the “In His Hands Ministry” in care of St. Joseph’s Catholic Church, attention Joanne, 877 N. Campus Avenue, Upland, CA 91786; or the VNA & Hospice of Southern California, 150 West First Street, Suite 270, Claremont, CA 91711-4750.